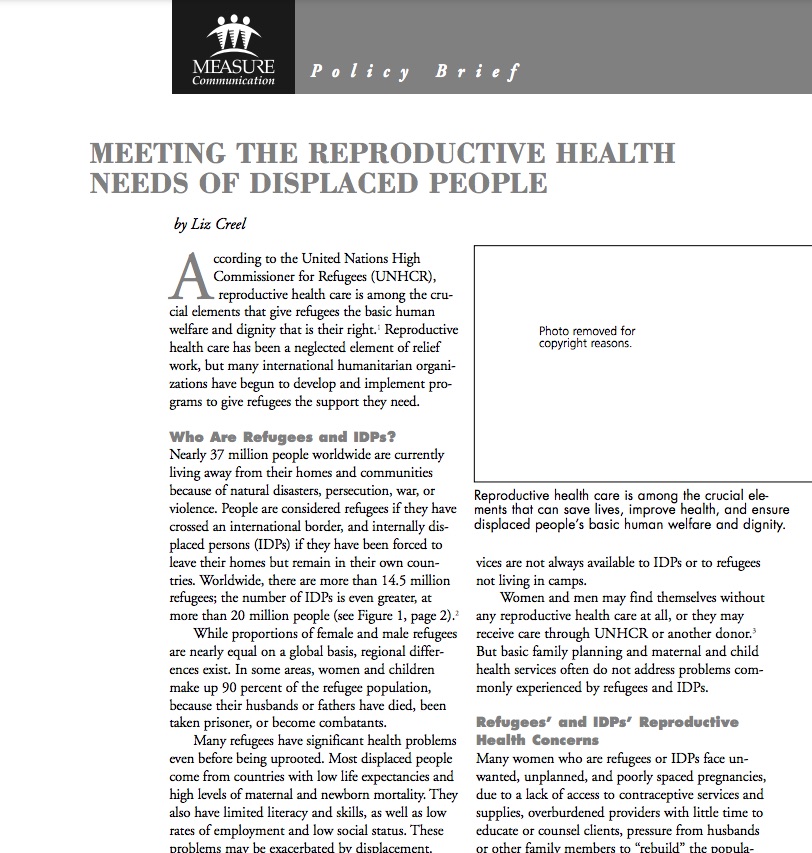 (July 2002) According to the United Nations High Commissioner for Refugees (UNHCR), reproductive health care is among the crucial elements that give refugees the basic human welfare and dignity that is their right.1 Reproductive health care has been a neglected element of relief work, but many international humanitarian organizations have begun to develop and implement programs to give refugees the support they need.

Who Are Refugees and IDPs?

Nearly 37 million people worldwide are currently living away from their homes and communities because of natural disasters, persecution, war, or violence. People are considered refugees if they have crossed an international border, and internally displaced persons (IDPs) if they have been forced to leave their homes but remain in their own countries. Worldwide, there are more than 14.5 million refugees; the number of IDPs is even greater, at more than 20 million people.2

While proportions of female and male refugees are nearly equal on a global basis, regional differences exist. In some areas, women and children make up 90 percent of the refugee population, because their husbands or fathers have died, been taken prisoner, or become combatants.

Many refugees have significant health problems even before being uprooted. Most displaced people come from countries with low life expectancies and high levels of maternal and newborn mortality. They also have limited literacy and skills, as well as low rates of employment and low social status. These problems may be exacerbated by displacement.

Refugees and IDPs face myriad changes, including disruption in the social support from family and friends, pressure to change their desired fertility levels, and changing societal roles. Refugees who end up in camps, however crowded, are often the lucky ones, since camps usually provide food, water, and basic health care, along with education, job training, and other activities. Such services are not always available to IDPs or to refugees not living in camps.

Women and men may find themselves without any reproductive health care at all, or they may receive care through UNHCR or another donor.3 But basic family planning and maternal and child health services often do not address problems commonly experienced by refugees and IDPs.

Many women who are refugees or IDPs face unwanted, unplanned, and poorly spaced pregnancies, due to a lack of access to contraceptive services and supplies, overburdened providers with little time to educate or counsel clients, pressure from husbands or other family members to “rebuild” the population, and increases in rape and prostitution. Refugees are at higher risk than stable populations for sexually transmitted infections (STIs) and gender-based violence.4

Research indicates that the availability of contraceptives has improved in stable refugee populations since the mid-1990s.5 Researchers know little about how the immediate aftermath of flight affects fertility preferences, but refugees’ fertility desires appear to revert relatively quickly to what they were before flight.6 A reproductive health study of Afghan refugees in Pakistan in 2000 showed that family planning methods were used by 9 percent of currently married women, with 70 percent of those users preferring to receive injections.7

Rape and other forms of violent sexual assault have been used as weapons of war to demoralize communities (as in the former Yugoslavia) and even to alter the ethnic composition of a population (as occurred in both Rwanda and the former Yugoslavia). Border guards, soldiers, and fellow refugees may also perpetrate acts of violence against refugee women. One study of more than 1,000 households in Sierra Leone during its eight-year civil war showed that as many as 11 percent of displaced women and girls experienced war-related sexual violence.8 Gender-based violence can have long-lasting, severe physical effects, including HIV/AIDS, pregnancy, and miscarriage.

STIs, including HIV/AIDS, can spread quickly in refugee settings, because of limited contraceptive supplies, such as condoms; the presence of military forces, who tend to have higher STI rates than civilian peacetime populations;9 refugees’ greater vulnerability to sexual and gender violence and sex work; greater exposure to inadequately screened blood transfusions; and the presence of populations with HIV.10

Many refugee women and their newborns face health problems related to pregnancy and delivery, including pregnancy complications and miscarriages.11 During flight and early settlement, women may be forced to give birth alongside roads, in forests, or in temporary shelters, with conditions hazardous both to them and their children. One study of Afghan refugees indicated that 41 percent of women’s deaths were due to maternal causes, exceeding any other cause for women.12 Another study showed that both the perinatal mortality rate (stillbirths and deaths in the first week of life) and the proportion of low birth-weight babies doubled during the siege of Sarajevo; there were eight times as many birth defects as there had been before the siege.13 Researchers attributed these increases in part to the damaged health infrastructure and to nutritional deficiencies.14

Complications of pregnancy and childbirth, such as severe bleeding, obstructed labor, and unsafe abortion, may be more serious for displaced women, and may lead to infertility and death. A refugee woman who wants to end her pregnancy and has no access to safe abortion services may seek an unsafe abortion and end up requiring emergency care and counseling. According to the United Nations Population Fund (UNFPA), postabortion complications alone account for up to 50 percent of maternal deaths in refugee situations.15

In the mid-1990s, several events drew attention to refugees’ need for reproductive health care. A 1994 study by the Women’s Commission for Refugee Women and Children showed that these needs (with the exception of antenatal and delivery care) were rarely addressed by existing health services. Both the 1994 International Conference on Population and Development and the 1995 Fourth World Conference on Women called for greater efforts to protect refugee and displaced populations and to guarantee their access to health care services.16 Following these conferences, several coalitions formed to increase refugees’ access to quality reproductive health services, including the Inter-Agency Working Group on Refugee Reproductive Health (IAWG) and the Reproductive Health for Refugees Consortium (RHRC). Conflicts in Rwanda and the former Yugoslavia, where widespread sexual violence and atrocities against women occurred, also drew attention to refugees’ reproductive health care needs.

The IAWG produced a manual that incorporates World Health Organization technical standards, and concluded that reproductive health for refugees should cover family planning, protection from sexual and gender violence, prevention and treatment of STIs and HIV/AIDS, prenatal and safe delivery care, and emergency care for complications of pregnancy and childbirth, including abortion-related complications.17

International health experts recommend providing a set of priority reproductive health interventions in the initial, emergency phase of a refugee crisis, and a more comprehensive package of services once the situation has stabilized. In the initial phase, UNHCR advises using the Minimum Initial Service Package (MISP), a set of activities designed to reduce death and illness related to reproductive health. The package must be implemented in a coordinated manner by trained staff. Specific components of the MISP include the following:

One problem in implementing the MISP has been the lack of trained workers and emergency supplies. In response, UNFPA developed the Reproductive Health Kit for Emergency Situations, which includes the materials needed for the MISP; the kit includes 12 subkits of condoms, childbirth supplies for use at home and by professionals, post-rape supplies, surgical delivery equipment, and blood transfusion supplies.19 Since 1997, the MISP has been used to support emergency reproductive health care in crises in several countries, including Afghanistan, Honduras, Turkey, and Uganda.20

Once a crisis stabilizes, international health experts recommend that reproductive health services be expanded to meet refugees’ longer-term needs by involving communities in designing and implementing services. If refugees live together in camps, experts advise that clinics and outreach programs be established, with reliable systems for referring women to local clinics or hospitals. If refugees are dispersed throughout the community, experts recommend that efforts be made to strengthen the existing government health system and to provide additional support for refugee-specific health problems, such as post-traumatic stress disorder.21

Reproductive health care is among the crucial elements that can save lives, improve health, and give displaced people basic human welfare and dignity. The tools now exist to make this care available; what remains to be achieved is adequate commitment and funding to meet refugees’ needs.