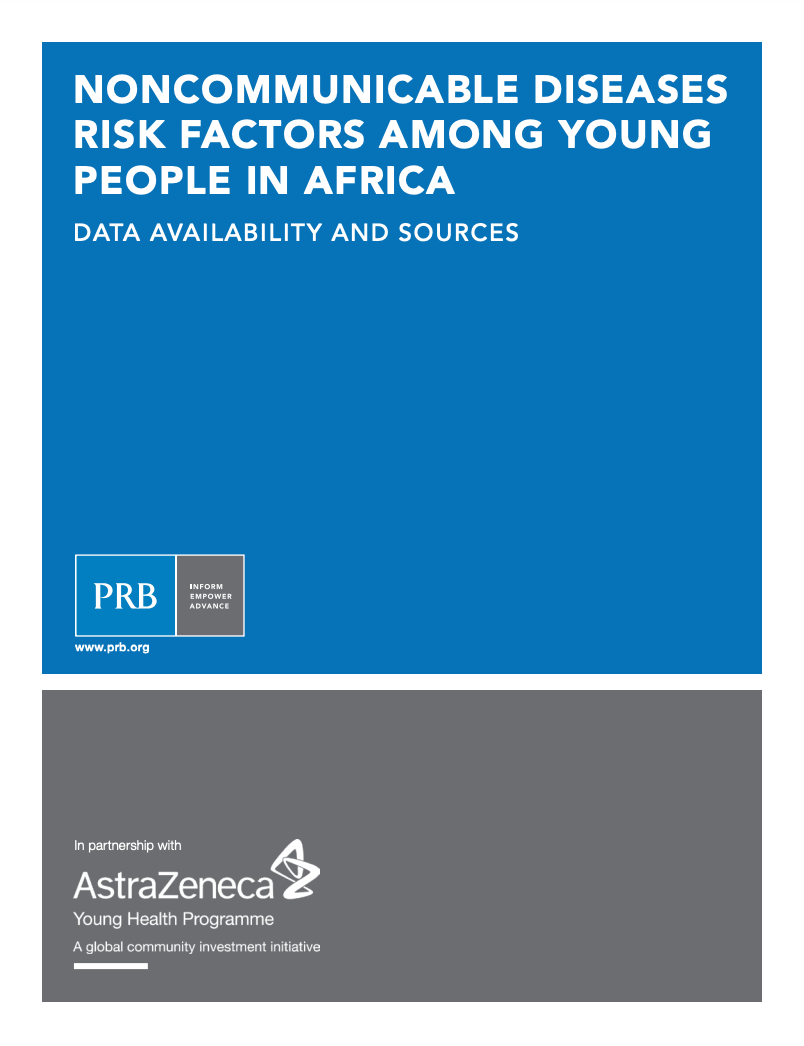 Noncommunicable diseases (NCDs) are now the leading causes of death in most parts of the world. Although this is not the case in sub-Saharan Africa, where infectious diseases still predominate, the trend of NCDs is projected to shift in the coming decades. One estimate shows that by 2030, sub-Saharan Africa will experience the largest increase in the share of total deaths from NCDs. It is estimated that by then, nearly half—46 percent—of all deaths in the region will be from NCDs, reflecting a dramatic increase from 28 percent in 2008. This report, produced by PRB in partnership with the AstraZeneca Young Health Programme, is the culmination of efforts to identify available data sources on risk factors for NCDs among youth in sub-Saharan Africa.

The World Health Organization (WHO) has identified four main NCDs—heart disease/hypertension, chronic respiratory diseases, diabetes, and most cancers—all of which are primarily caused by four key risk factors. These include tobacco use, immoderate alcohol use, physical inactivity, and unhealthy diet—patterns that are typically initiated during adolescence or young adulthood and set the stage for unhealthy behaviors and diseases later in life. For example, the earlier in life that tobacco and alcohol use are initiated, the greater the risk of addiction. In contrast, when positive health behaviors such as healthy eating and regular exercise are established at a young age, they are more likely to be carried through to adulthood. Also, long duration of overweight and obesity—often an end result of inactivity and poor diet—are more detrimental to health. Thus, working with young people to mitigate risks and establish positive health behaviors early in life can foster a healthier adult population and substantially decrease the burden of NCDs.

The WHO 2008-2013 Action Plan to Prevent and Control NCDs presents three main objectives: mapping the emerging epidemics of NCDs and their determinants; reducing the levels of exposure to risks and increasing the capacity of individuals to deal with risks; and strengthening the health care system to address the demands of NCDs. An explicit focus on youth is essential to achieving these objectives. One critical first step is to gather and analyze available data on the scope and magnitude of risk factors among youth, because this can provide insight about the likely future burden of NCDs. For example, a high prevalence of risky behaviors in youth will generally contribute to a high burden of NCDs in the future, and can flag an impending need for greater attention and resources to prevent those behaviors among youth. Documenting youth risk behaviors can also help focus policies and programs designed to mitigate risks and promote healthy lifestyles. Risks may differ by gender, ethnicity, rural versus urban residence, or other social and environmental factors. It is important to understand and document these differences, so that interventions can be well-tailored to various subgroups, ensuring that resources are spent in the most effective and efficient ways possible.

The need for high-quality data on NCD risk factors among youth is evident. The report provides a list of data sources in countries across Africa that contain data for young people ages 10 to 24 on indicators pertaining to tobacco and alcohol use, physical inactivity, unhealthy diet, and overweight/obesity status (often used as a proxy for unhealthy diet). The compilation of data sources involved various approaches including keyword searches via the Internet and through professional databases such as PubMed; targeted requests to ministries of health and youth; and inquiries among PRB’s network of colleagues working in public health, population, and development. The search was limited to data collected within the last decade, in 2004 or later.

The search produced a number of reports and studies documenting findings from a wide range of surveys, including large, multicountry surveys, as well as single-country surveys focused on a single city or township. The accompanying report lists available data sources per country per risk factor. All listed data sources are publicly available and accessible to the general audience, that is, data have been aggregated and published.