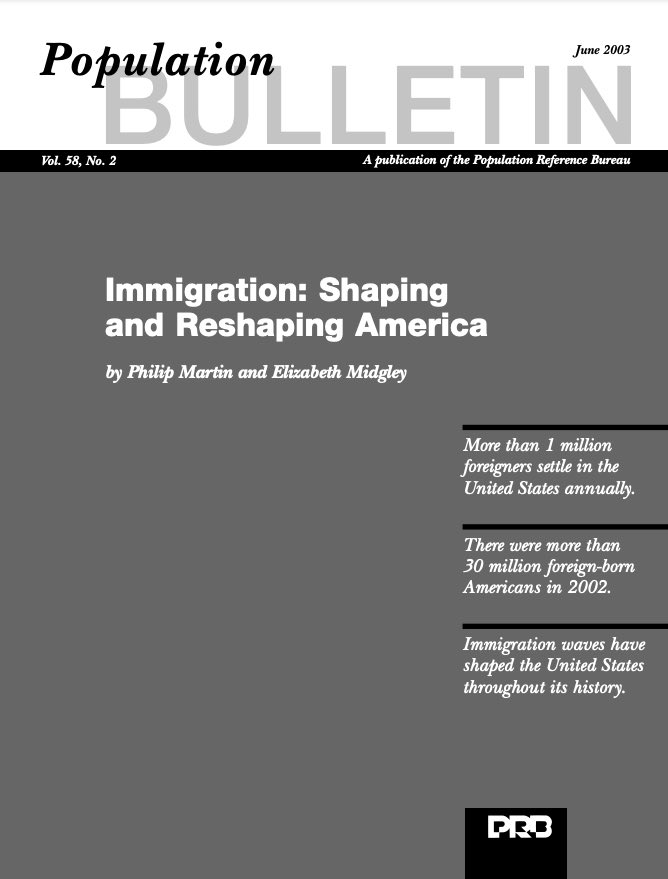 (June 2003) The United States has always had a significant foreign-born population, but the number of foreign born reached an all-time high of 32.5 million in 2002 — equal to 11.5 percent of the U.S. population — according to the Current Population Survey (CPS).1 During the peak years of immigration early in the 20th century, the number of foreign-born residents was lower, but they made up a larger share of U.S. residents. In 1910, for example, there were only 13.5 million foreign-born residents, but they represented 15 percent of all U.S. residents.

Not all foreign-born residents are immigrants. Demographer Jeff Passel estimates that at least 3 percent are nonimmigrants, including foreign students, diplomats, and temporary workers, and some will return to their countries of origin. Between 7 million and 9 million are unauthorized foreigners, which means that only about 75 percent of all foreign-born residents are legal immigrants. One reason for the range in the estimate of unauthorized foreigners is that some demographers count foreigners with a quasi-legal status as unauthorized, and others treat them as authorized.

More than one-half of the 2002 foreign-born residents were born in Latin America — with 30 percent from Mexico alone. Twenty-six percent were born in Asia, 14 percent in Europe, and 8 percent from Africa and other regions.

Foreign-born residents were 14.5 percent of the 121 million U.S. workers employed full-time for at least part of 2001. Immigrants were 44 percent of private household workers, 42 percent of those with nonmanagerial farming occupations, and 20 percent of operators, fabricators, and laborers.