Kenya is experiencing a growing NCD epidemic: current estimates show that NCDs make up a third of all deaths.2 Cardiovascular diseases (CVDs), including hypertension, heart attacks, and stroke, account for most NCD deaths in Kenya, followed by cancers, chronic lung diseases (especially chronic obstructive pulmonary disease), and diabetes. NCDs already account for more than 50 percent of total hospital admissions and over 55 percent of hospital deaths in Kenya.3

A number of factors, including rapid urbanization, globalization, and aging of the population all contribute to the growing NCD burden in Kenya, but many NCDs are largely preventable by changing unhealthy behaviors. The four major NCDs mentioned earlier (CVDs, cancers, chronic lung diseases, and diabetes) share four key risk behaviors: tobacco use, harmful use of alcohol, lack of exercise, and an unhealthy diet.  These are all behaviors that are typically initiated or solidified during adolescence or young adulthood and set the stage for NCDs later in life. While these risk behaviors are still relatively low among youth in Kenya compared to youth in other regions, their prevalence is increasing.

Therefore, a window of opportunity exists for Kenya now to address the four key risk behaviors in its large and growing youth population to reduce the NCD burden in the coming decades. According to the World Health Organization (WHO), 70 percent of premature deaths in adults worldwide are the result of behaviors that begin in adolescence.4 Scaling up proven, cost-effective interventions that discourage unhealthy behaviors and promote healthy ones can significantly shift the trajectory of the costly NCD epidemic in the near future. Doing so now will also help Kenya meet some of the Sustainable Development Goals and improve chances of achieving greater economic growth and development.

Kenya will see an increasing number of deaths from NCDs relative to other causes of death over the coming decades.  More importantly, many of these NCD deaths will affect Kenyans at the height of their productive years, not in old age. Kenyans, like others living in low- and middle-income countries, develop NCDs at younger ages, get sicker, and die prematurely than those in high-income countries. About two-thirds of NCD deaths in Kenya occur prematurely (defined as deaths among people below age 70), compared to only a quarter in high-income countries.5 Premature deaths result from various factors, including greater exposure to risk factors, delayed diagnosis, and insufficient treatment. Further, deaths from NCDs are typically preceded by a period of disability when one’s productivity is compromised, while the need for health care and other support increases.  NCDs sometimes even push those burdened by the disease and their families into poverty or keep them impoverished.  The increasing prevalence of NCD risk behaviors among youth in Kenya will likely exacerbate the pattern of premature deaths.

Kenyan Youth Are Engaging in All Four NCD Risk Behaviors

Kenyan youth are engaging in all four NCD risk behaviors, and there are signs that the levels are increasing.

Alcohol Use. A 2012 survey by the National Authority for the Campaign Against Alcohol and Drug Abuse found that about 10 percent of young people ages 18 to 24 currently use alcohol (defined as having any drinks containing alcohol in the past 30 days).6 Alcohol use contributes to CVDs, cancers, and diabetes. Any amount of alcohol use can be harmful to youth whose bodies are still growing. Heavy drinking is also associated with many other health risks, including unprotected sex that can increase chances of contracting HIV and other sexually transmitted infections, violence against women (and violence in general), road traffic accidents, and poor mental health.

The risk of developing alcohol dependence substantially increases for those who start drinking in early adolescence, compared to those who start in late adolescence or in their early 20s, even while taking into account family history of alcohol abuse. In Kenya, locally produced, illicit brews that are cheap and highly potent (and sometimes toxic) are also widely available to youth. This alcohol is even harder to regulate than legally manufactured alcohol and it is challenging to enforce the age restriction on sales.

Tobacco Use. The 2013 Global Youth Tobacco Survey, a national survey of 13-15-year-old secondary school students, showed that 13 percent of boys and 7 percent of girls currently use any tobacco products (defined as any use in the past 30 days).7 Among these boys and girls, the majority used “smoked” tobacco products, such as cigarettes and shisha (a water pipe), and girls were more likely to use smokeless tobacco products than boys. Exposure to secondhand smoke was also high: one-quarter of students reported being exposed to tobacco smoke at home and about 45 percent to tobacco smoke inside enclosed public spaces. There have been declines in cigarette smoking among this age group from 15 percent to 5 percent between 2001 and 2013, though the trends in the use of other tobacco products have been less clear. Tobacco use contributes to all four of the main NCDs.

A worrisome trend has emerged among youth in the increasingly popular use of shisha, especially in urban areas. Some young people may assume that shisha is safe or safer than regular cigarettes. However, the nicotine dose in a typical shisha smoking session is more than one and a half times higher than that contained in one cigarette.8 Furthermore, while the secondhand smoke from any smoked tobacco poses health risks, one hour of exposure to shisha smoke, compared to cigarette smoke, may result in two to 10 times the amount of harmful chemicals in the air, including some that cause cancer.9

As with alcohol, cheaper, locally produced cigarettes that are poorly regulated and are widely available from street vendors and kiosks bolster their accessibility among youth.

Marketing of alcohol and tobacco products to youth plays a key role in initiating use of these substances by youth. Such marketing often comes in the form of advertisements, promotions, and sponsorships. For example, alcohol companies often sponsor sporting events that many youth attend. Also, as many as one in 10 students in Kenya reported ever being offered a free tobacco product from a tobacco company, and one in 10 also reported owning some items with a tobacco brand logo on it.10 Despite restrictions on advertisements, young Kenyans are still exposed to them in many places, and exposure to such marketing strategies have generally been shown to increase use of these substances.

Unhealthy Diet and Physical Inactivity. Together, unhealthy diets and insufficient physical activity contribute to overweight and obesity, and consequently, to NCDs such as Type 2 diabetes, CVDs, and certain cancers. Demographic and Health Surveys between 1993 and 2014 show a doubling of the percentage of women who are either overweight or obese for both 15-to-19 and 20-to-24 age groups (overweight defined as a Body Mass Index (BMI) of 18 or above, and obesity defined as a BMI of 25 or above).11 Kenya is also undergoing a nutrition transition—it faces the double burden of an emerging epidemic of overweight and obesity and persistent undernutrition. While 13 percent of 15-19-year-old women were overweight or obese in 2014, 17 percent were classified as being thin, including 5 percent who were particularly thin (thin defined as a BMI below 18.5, and “particularly” thin defined as a BMI below 17). 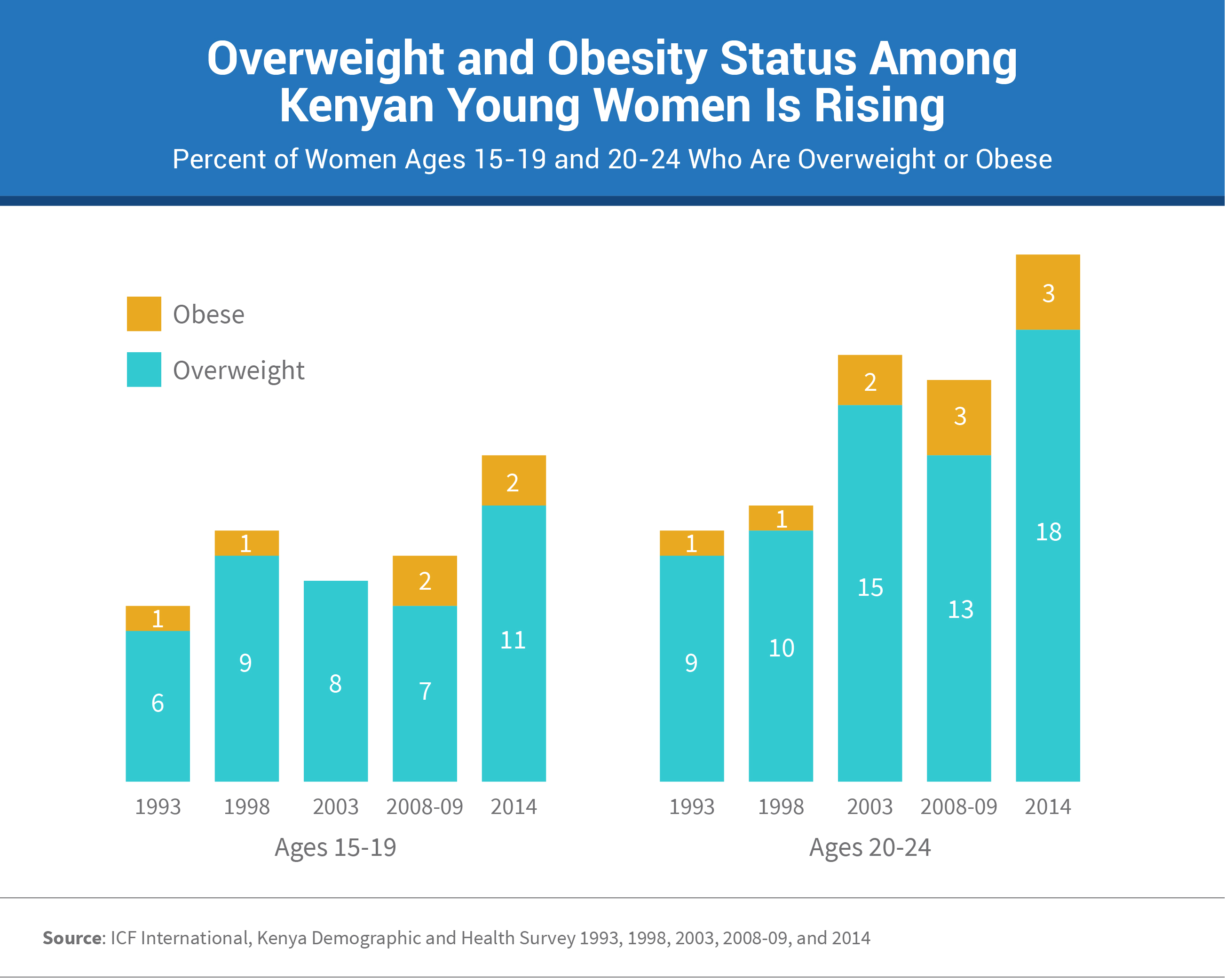 Rapid economic and social change, together with urbanization and globalization in Kenya are leading to a shift away from healthier, traditional diets to those filled with sugar, sodium, and saturated fat.  Increased availability and consumption of commercially prepared and highly processed foods and sugary beverages contributes to overweight and obesity and to various NCDs. The food industry targets children and youth in an effort to influence their taste preferences and encourage brand loyalty that can continue into adulthood.

Aside from poor diets, a lack of sufficient exercise is also increasing the risk for developing NCDs. According to the International Study of Childhood Obesity, Lifestyle and Environment conducted in Nairobi in 2012, among 9-11-year-old students in primary schools, less than 10 percent of girls and less than 20 percent of boys got sufficient levels of physical activity, defined as engaging in at least 60 minutes of moderate-to-vigorous physical activity every day.12 Over half of the students reported using motorized transportation to and from school every day. Rapid urbanization in Kenya has significantly reduced the levels of physical activity required for work or transportation and has also given rise to environmental factors such as heavy traffic, poor air quality, and crime that can make it difficult to be active outside. Lack of access to safe, well-lit sidewalks and parks and other spaces for recreation can also prevent youth from getting enough exercise.

Exercise has multiple other benefits including reducing the risk of developing mental health conditions, such as anxiety and depression that are common among young people. Physical activity among youth is also typically associated with lower levels of other NCD risk behaviors such as tobacco and alcohol use.

As a priority, Kenya should focus on curbing NCD risk behaviors in youth while levels are still relatively low. For example, programs need to focus on preventing alcohol initiation and not just alcohol cessation. A clear focus on interventions targeting youth risk behaviors is critical to the overall strategy to address a future NCD epidemic in Kenya.

Interventions should target youth, as well as those who influence their various decisions, including peers and family members. While recognizing the importance of personal choice, it is also crucial to put in place a range of supportive, reinforcing policies and programs that make unhealthy decisions less likely for youth.

For example, it is essential to enforce regulations on alcohol and tobacco sales and marketing to children and youth, though the availability of informal products makes it challenging. The Tobacco Control Act, 2007, the principal law governing tobacco control in Kenya, prohibits sale of tobacco products to anyone under age 18. Such laws can only be effective when systems are put in place to enforce them.13 Implementing higher taxes on cigarettes has been effective in reducing consumption among youth, who are particularly sensitive to price increases.  Mandating that schools and other places where young people congregate be smoke- and alcohol-free also helps limit exposure to these substances.

Ensuring that youth receive the correct information about the health impacts of their behaviors is also important to help youth make healthy decisions. For example, the Kenyan Ministry of Health launched an anti-tobacco mass media campaign in 2014 titled, “Smoking Kills—Quit Now.14 It broadcast messages on radio and television about the adverse health effects of smoking tobacco, as well as secondhand smoke in Swahili, English, and other local languages. The Ministry also disseminated informational posters in schools, universities, and other public institutions to create awareness.

Schools can also play an important role. For example, the school curriculum in Kenya is currently being revised to increase the level of physical activity children get during school, though a challenge is the tendency of many schools to spend the physical education time on other academic subjects. School-based information programs on the importance of staying away from alcohol and tobacco have also been found successful in some settings.