California, Florida, and Texas made up a combined 27 percent of the U.S. population in 2015 but accounted for 48 percent of U.S. population growth between 2014 and 2015, according to new Census Bureau estimates. The relatively fast growth in these three states reflects a combination of factors, including a rebounding economy that has fueled domestic and international migration in many Sun Belt states; and rapid population growth among first- and second-generation immigrants, especially from Latin America. If current trends continue, the combined population in California, Florida, and Texas could exceed 100 million people by 2030—up from 81 million in 2010—as the three states increase their economic and political positions relative to the rest of the country.1

The recent population growth in California, Florida, and Texas represents a sharp increase compared with the 2000s (when the three states made up 38 percent of total growth) and the 1990s (when they accounted for just 34 percent of growth) (see figure). The 1980s was the only decade in which the three states accounted for a greater share of total growth (54 percent), owing mostly to rapid population growth in California during that decade. Since 2010, Texas has had the largest net increase in population among the 50 states—adding 2.3 million people, more than the net population increase in all of the states in the Northeast and Midwest combined (1.9 million). 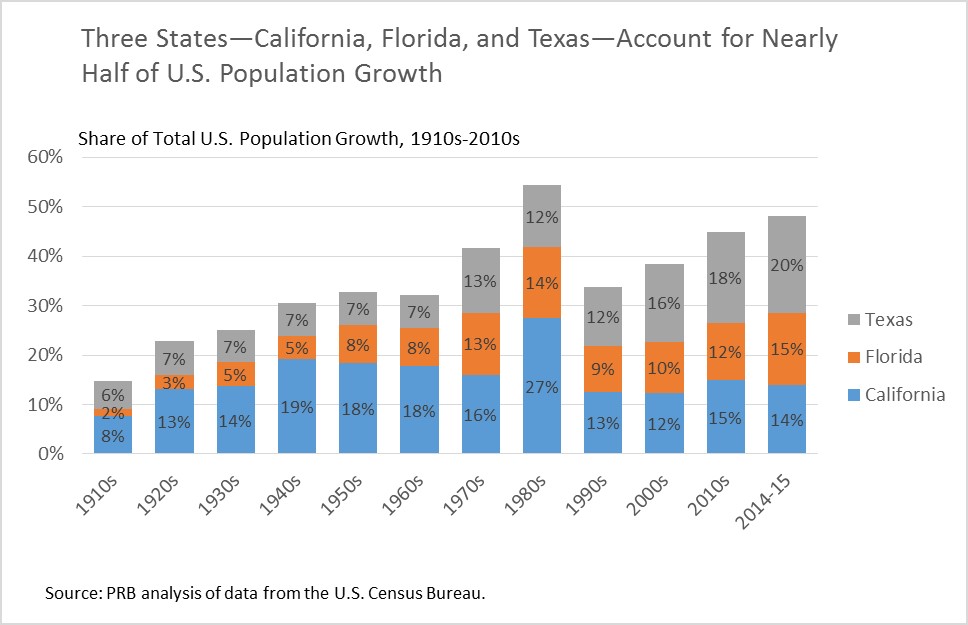 A Western and Southern Revival

All three states continued to grow during the 1990s but trends in California, Florida, and Texas were overshadowed by rapid growth in the Mountain West, especially in Arizona, Colorado, Idaho, Nevada, and Utah. During the 2000s, the housing market crisis and recession dampened population growth in California and Florida, while the population in Texas—which was somewhat insulated from the economic downturn—continued to increase rapidly.

Since 2010, migration flows to the Sunbelt have rebounded, although they have not returned to their peak levels from the mid-2000s. Just last year, in a major shift in the demographic balance, Florida passed New York as the third most-populous state. Improvements in the housing and job markets may help explain Florida’s rebound. At 5 percent, the national unemployment rate is down sharply from its double-digit peak of more than 10 percent in October 2009, and fewer homeowners have mortgages that are “under water.” As of November 2015, the unemployment rates in Texas (4.6 percent) and Florida (5.0 percent) were at or below the national average (5.0 percent) while California’s rate remained relatively high at 5.7 percent.

Another key factor driving population growth in California and Texas is their relatively young populations relative to many other states. Having a young population creates population momentum through a large number of births relative to deaths. Between 2014 and 2015, California and Texas registered more than twice as many combined births (902,000) as deaths (443,000), resulting in the addition of 459,000 people through natural increase. Florida also experienced growth due to natural increase during this period, but because of its large population of retirees, had a more balanced mix of births relative to deaths.

The key to the relatively youthful populations in California and Texas—and to a lesser degree, Florida—is immigration, especially from Latin America. While the U.S. population as a whole is aging rapidly as the large cohort of baby boomers reaches retirement age, some states have become “fountains of youth” by attracting immigrant workers—many of whom start families after they arrive in the United States. Between 2014 and 2015, California, Florida, and Texas had a net (combined) increase of 412,000 international migrants, mostly from Latin America. California had the largest net increase in international migrants among the 50 states, followed by New York, Florida, and Texas.

Domestic (state-to-state) migration was another key factor driving population growth in Florida and Texas between 2014 and 2015. Young adults are moving to these states primarily for jobs, while many older adults move to the Sun Belt to escape the cold northern winters, to live closer to family members, or for the lower cost of living. During the same period, California experienced a net outflow of domestic migrants, as many residents moved to lower-cost states, especially Arizona, Nevada, and Texas.

State population gains and losses are important not only from a demographic and economic perspective, but also because they affect the balance of political power in Congress. After each decennial census, population totals in each state are used to reallocate the 435 seats in the U.S. House of Representatives.

Over the past century, southern and western states have gained seats at the expense of states in the Northeast and Midwest, and this trend is continuing. Texas gained four seats during the reapportionment process following the 2010 Census, while Florida gained two. In the current Congress, California leads the nation with 53 seats, followed by Texas (36), and Florida and New York (27 each).

If current trends continue, California and Florida could each gain another congressional seat after the 2020 Census, and Texas could gain another three seats.2  Although it’s difficult to predict longer-term trends, state demographers in California, Florida, and Texas expect that these population gains will continue at least through 2030, when the combined population of the three states could reach 100 million people.