As they age, Black adults experience more rapid decline in the body’s ability to recover from stress or damage, with social and economic factors contributing to this decline. 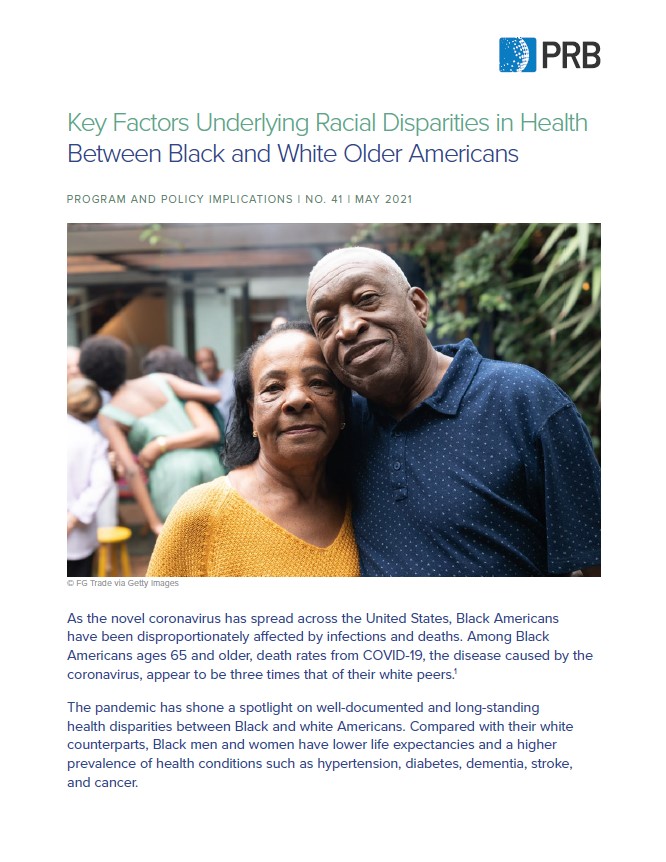 Risk of diabetes, heart disease, and stroke increase among Black adults as they age because of poor blood pressure control and diabetes prevention, Uchechi A. Mitchell, Jennifer A. Ailshire, and Eileen M. Crimmins show.1 Using Health and Retirement Study data, they examine changes in health risks for diabetes, heart disease, and stroke measured by multiple cardiovascular and metabolic biomarkers. The researchers find that older Black adults began the study with a higher number of risk factors than older white and Hispanic adults, and their risk increased over four years, driven by increases in pulse pressure (a measure of stiffening arteries) and blood glucose (an indicator of diabetes).

As they age, Black adults experience more rapid physiological dysregulation, a decline in the body’s ability to recover from stress or damage. Lifestyle and health care factors only explain a fraction of this difference, the researchers note. They point to a variety of potential explanations, including:

Older Black adults also have persistently higher rates of disability relative to white adults. Between 1980 and 2000, older white adults experienced consistent declines in disability levels, but older Black adults saw little improvement and possibly an increase in disability.2 Miles G. Taylor, Scott M. Lynch, and Stephanie Ureña focus on disability related to inability to perform the basic activities of daily living, such as bathing and dressing, using the National Long-Term Care Survey. They identify three health factors strongly linked to disability among Black adults: stroke, diabetes, and heart attack. These factors also are related to obesity, which is implicated in increases in disability among the general U.S. population.

“Although we find no consistent improvements among older Black adults, and link these to particularly disabling conditions, it is possible that white older adults were simply more advantaged in terms of resources needed to carry out these tasks independently,” they write.

Black adults may be less likely to have accessible home environments. For example, a decline in the share of white adults who have trouble bathing may reflect better physical function or an increase in the availability of walk-in showers in white households.

“Increased accessibility to medications and treatments for heart attack, stroke, and diabetes among older African Americans may reduce the severity of disablement,” Taylor, Lynch, and Ureña write. Greater access to assistive devices (such as walkers and wheelchairs) and changes to living environments (such as grab bars and ramps) may contribute to better physical function among older Black adults.

There is also some good news. Improved diagnosis and treatment of high blood pressure and high cholesterol reduced racial disparities in cardiovascular disease (CVD) risk between 1990 and 2010, Mitchell and colleagues show.3 The racial gap in CVD risk narrowed for women because of improved blood pressure and lipid profiles among Black women and increasing obesity prevalence among white women.

Whether these trends will continue or translate into further declines in disparities in deaths from CVD is unclear, they write. Recent increases in obesity may offset some of the improvements seen in the 1990s to 2010s and “may lead to a slowing or reversal of trends in racial disparities in total cardiovascular risk.”