Many known strategies exist to prevent traffic accidents. However, from 2007 to 2010, 87 countries saw increases in the number of traffic deaths.2 Concerned about this trend and in the context of an increasing number of cars on roads worldwide, the UN General Assembly declared 2011 to 2020 as a ‘Decade of Action for Road Safety.’ A recent report, Global Status Report on Road Safety 2013: Supporting a Decade of Action, serves as the baseline for monitoring country progress in implementing traffic safety measures. The goal is to reverse the trend in road traffic fatalities, saving an estimated 5 million lives over the 10-year period.

The report reveals a 15 percent global increase in registered vehicles, mostly in China and India. In China, registrations jumped almost 28 percent in 2010; and in India, the increase was 9 percent from the previous year.3

According to the report, 88 countries improved their road safety practices between 2007 and 2010, reflected in a decrease in the number of traffic accidents, and confirming the effectiveness of safety measures. Eighty percent of road traffic accidents occur in middle-income countries (such as China, India, Mexico, Thailand, and Russia), which account for 72 percent of world population, but only 52 percent of registered vehicles, in effect shouldering these countries with a disproportionate burden of global traffic fatalities (see figure).4 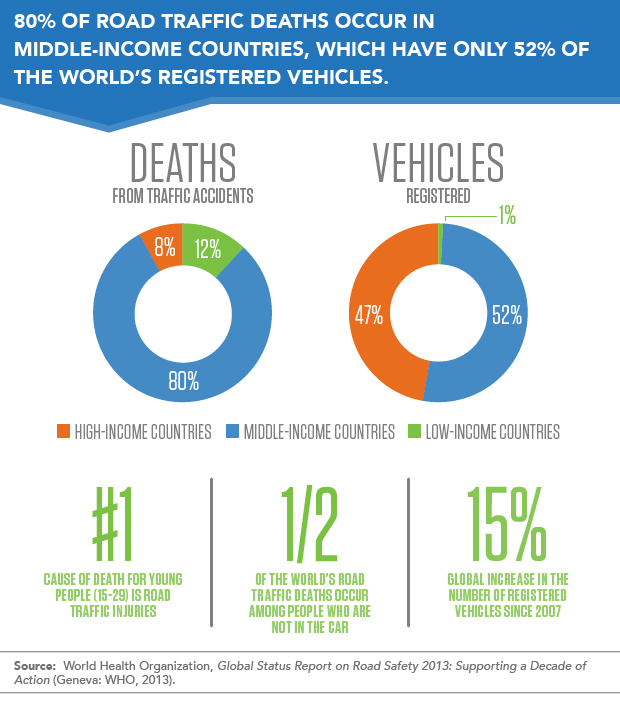 Majority of Deaths to Pedestrians and Motorcyclists

Road traffic injuries are predictable and preventable, but successful interventions do not always transfer easily from locations where they have been effective. In developed countries, road traffic deaths have decreased since the 1960s because of seat-belt laws, enforcement of speed limits, penalties for mixing alcohol consumption with driving, and safer design and use of roads and vehicles.

In general, pedestrians, cyclists, and motorcycle riders are the most vulnerable road users as well as the heaviest users of roads in developing countries, such as Kenya or Bangladesh. The report reveals that one-half of the world’s road traffic deaths occur among people who are not even in a car—pedestrians (22 percent), motorcyclists (23 percent), and bicyclists (5 percent). But there are important differences in risk by region: In Africa, where walking and bicycling are common, 38 percent of deaths occur among pedestrians; and in the Western Pacific region where motorcycling is common, 36 percent of deaths occur among motorized two- and three-wheel vehicle users.

According to the report:

However, fewer laws are in place to protect pedestrians and bicyclists, who remain the most vulnerable to accidents. Without more attention to and enforcement of traffic safety measures, current trends would make traffic deaths the fifth-leading cause of deaths by 2030.