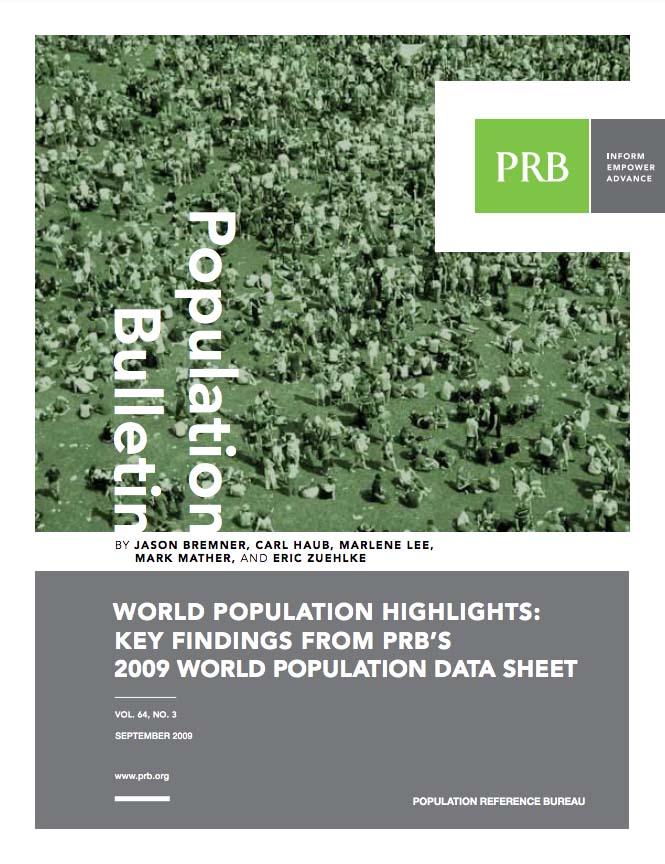 (August 2009) This Population Bulletin is a companion to PRB’s 2009 World Population Data Sheet.

Population change will shape the prospects of regions and countries over the next half century. Future population growth will be almost entirely in the developing world, with the fastest growth in the poorest countries and regions.

During the 20th century, nearly 90 percent of population growth took place in countries classified as less developed (LDCs) by the United Nations—all countries in Africa, Asia (except Japan), Latin America and the Caribbean, and Oceania (except Australia and New Zealand). This remarkable development resulted from an unprecedented decline in death rates in LDCs brought about by the spread of public health measures, health care, and disease prevention, particularly after the end of World War II in 1945. These improvements evolved over centuries in the more developed countries (MDCs), but the LDCs were able to benefit from them much more quickly. 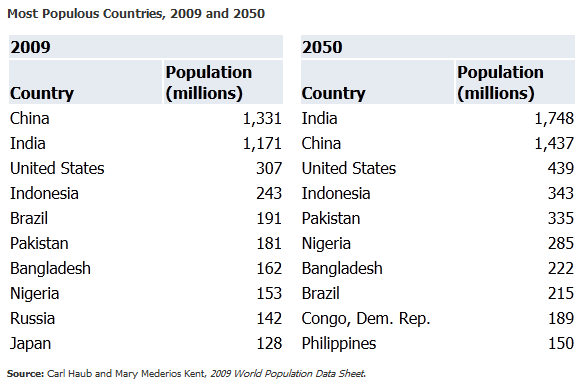 Although the world is aging, the proportion of the population between 15 and 24 in LDCs will continue to be higher than in MDCs. In 2005, young people represented 13.7 percent of the MDCs’ population, 166 million. That share is expected to drop to 10.5 percent by 2050. The vast majority of the world’s youth, 1.1 billion, are in LDCs. Sub-Saharan Africa has the world’s most youthful population and is projected to stay that way for decades.

Most developing countries have young populations because of high fertility and improvements in child survival. But as fertility rates decline and young populations grow older in many LDCs, a bulge in the working-age population with fewer children and elderly to support may provide benefits. This “demographic dividend” can bring improvements in society by allowing more investments in education, technology, and skills to support a growing economy; encourage more targeted investment in health care; and increase economic output because more people are working.

With the right investments in health, education, rural agricultural development, entrepreneurship, and training, a large youth population can be an opportunity for development and economic growth. However, without educational opportunities and a strong economy with healthy labor markets, the youth bulge can be problematic. The lack of job opportunities for youth in many countries breeds frustration. Recent unrest in Greece, Iran, France, and China has all been at least partly due to a lack of opportunities for young people. Some youth with few job prospects and little hope of future advancement may resort to criminal activities or join one side or another of armed conflicts.

Since 1950, the greatest gains in life expectancy at birth occurred among women. In more developed countries, average life expectancy for women rose from 69 years in 1950 to 81 years in 2009, while the average for men rose from 64 years to 74 years. Worldwide, men have higher mortality and greater disability than women. In nearly every country, men die at younger ages. However, women spend about 15 percent of their lives in poor health, compared with about 12 percent for men.

The widespread use of fossil fuels such as oil and coal has led to the release of enormous amounts of heat-absorbing gases into the atmosphere.

Population growth is one root cause of increases in global greenhouse gas emissions. But the complexity of the mechanisms through which demographic factors affect emissions is not fully taken into consideration in many analyses that influence governments’ climate change mitigation efforts. For example, reports by the Intergovernmental Panel on Climate Change include future scenarios where each member of the population is assumed to contribute equally to emissions; thus, population growth affects emissions. It is well known, however, that levels of greenhouse gas emissions depend on consumption and production patterns and that these patterns vary across populations. Changes in the composition of populations will affect global greenhouse gas emissions. Better climate change scenarios also depend on knowing how population composition will change over time.