The United States doesn’t have the world’s oldest population, but relatively high levels of age-related disease could affect the proportion of Americans who become critically ill because of COVID-19.

Older Americans on average have a higher level of age-related health problems than their counterparts in Europe and many other countries (see table). That’s according to a recent Lancet study that shows the United States ranked 53rd out of 195 countries when it comes to how burdened its people are by old age-related disease and disability.

By comparison, Switzerland ranked 1st, South Korea ranked 3rd, Italy ranked 5th, and China ranked 75th. To compare the relative health of adults among countries, the study adjusted for the wide differences in the proportion of adults in each age group in each country. For example, Italians ages 65 and older make up 23% of the population compared with 16% in the United States, 15% in South Korea, and 12% in China.

Why does it matter if older Americans have a relatively high disease burden? As the United States confronts coronavirus, the older population’s level of age-related disease and disability may affect the proportion of older adults who becomes critically ill. Individuals with underlying health conditions are more likely to have severe reactions to the COVID-19 infection, according to the CDC.

Cardiovascular diseases and cancers make up half of the age-related disease burden worldwide, according to Angela Y. Chang, assistant professor at the Danish Institute for Advance Study, who led the research team as a postdoctoral fellow at the University of Washington. Diabetes and chronic obstructive pulmonary disease (COPD, a respiratory disease) are also leading sources of disease and premature death, driving differences among countries.

“Italy’s adults have a relatively lower burden of diseases that we think are related to aging than people in other countries,” she said (see figure). Italy’s population, however, has a larger share of older adults than most other countries, which increases the overall level of age-related diseases, she noted. 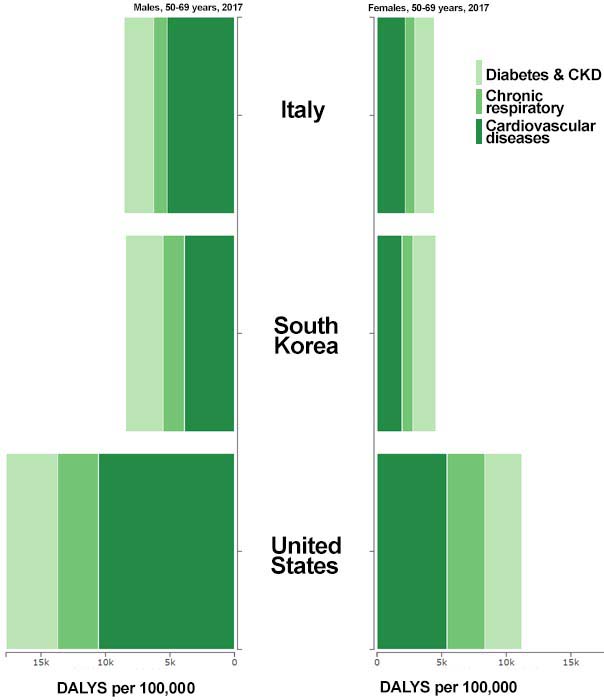 Note: Disease burden rate is based on the level of disability-adjusted life years (DALYS; healthy years lost) per 100,000 adults. CKD is an acronym for chronic kidney disease.
Source: Institute for Health Metrics and Evaluation, University of Washington, Global Burden of Disease Study 2017.

Supported by the U.S. National Institute on Aging, the study examined the level of age-related burden resulting from 92 diseases and conditions. Researchers used a measure that quantifies premature death and years of life lived in less than full health (disability-adjusted life years, known as DALYS) to calculate the age-related disease burden for each country.

This study is the first of its kind to explore both chronological age and the pace at which aging contributes to health deterioration, using estimates from the 2017 Global Burden of Disease study.

It identified wide variation in how well or poorly people age, showing that a 30-year gap separates countries with the highest and lowest ages at which people experience the health problems of an average 65-year-old worldwide.