Longstanding vulnerabilities suggest that some groups in Appalachia risk greater hardship related to the COVID-19 pandemic. 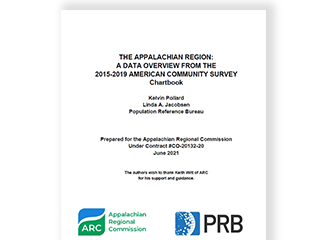 Prior to the COVID-19 pandemic, Appalachia’s median household income was on the rise, residents of nearly all ages were more likely to have health insurance than other Americans, and unemployment rates were on par with national levels.

But longstanding vulnerabilities suggest that some groups in the Region risk greater hardship related to the pandemic, including low-income young adults, disabled older adults, students without internet access, and residents of the Region’s rural counties (that is, counties not part of or adjacent to a metropolitan area).

The Appalachian Region: A Data Overview From the 2015-2019 American Community Survey, a PRB report for the Appalachian Regional Commission, provides a comprehensive picture of social and economic conditions in Appalachia immediately before the onset of the COVID-19 pandemic. Because detailed data for the pandemic period (2016-2020) will not be available until the end of 2021, this report can help program planners and policymakers pinpoint areas and population subgroups most at risk and target assistance.

Many Appalachian Young Adults Were Not Doing Well Before the Pandemic

Before the pandemic began, many young adults ages 18 to 34 were already at a disadvantage in Appalachia. Nearly one in four of those ages 18 to 24 were poor, with income below $25,926 for a family of two adults and two children. This poverty rate is higher than for any other age group in Appalachia. While some individuals in this age group may have low incomes because they are in training programs or college, the high poverty rate also reflects a lack of employment opportunities for young adults in the Region—particularly in rural counties where nearly one in three young people is poor.

One-sixth of adults ages 26 to 34 in the Region lacked health insurance, and this share exceeded 25% among young adults in 79 Appalachian counties—predominately in South Central and Southern Appalachia (see Figure 1). In fact, 26-to-34-year-olds were the only Appalachian age group less likely to have health insurance than their peers living elsewhere in the United States. 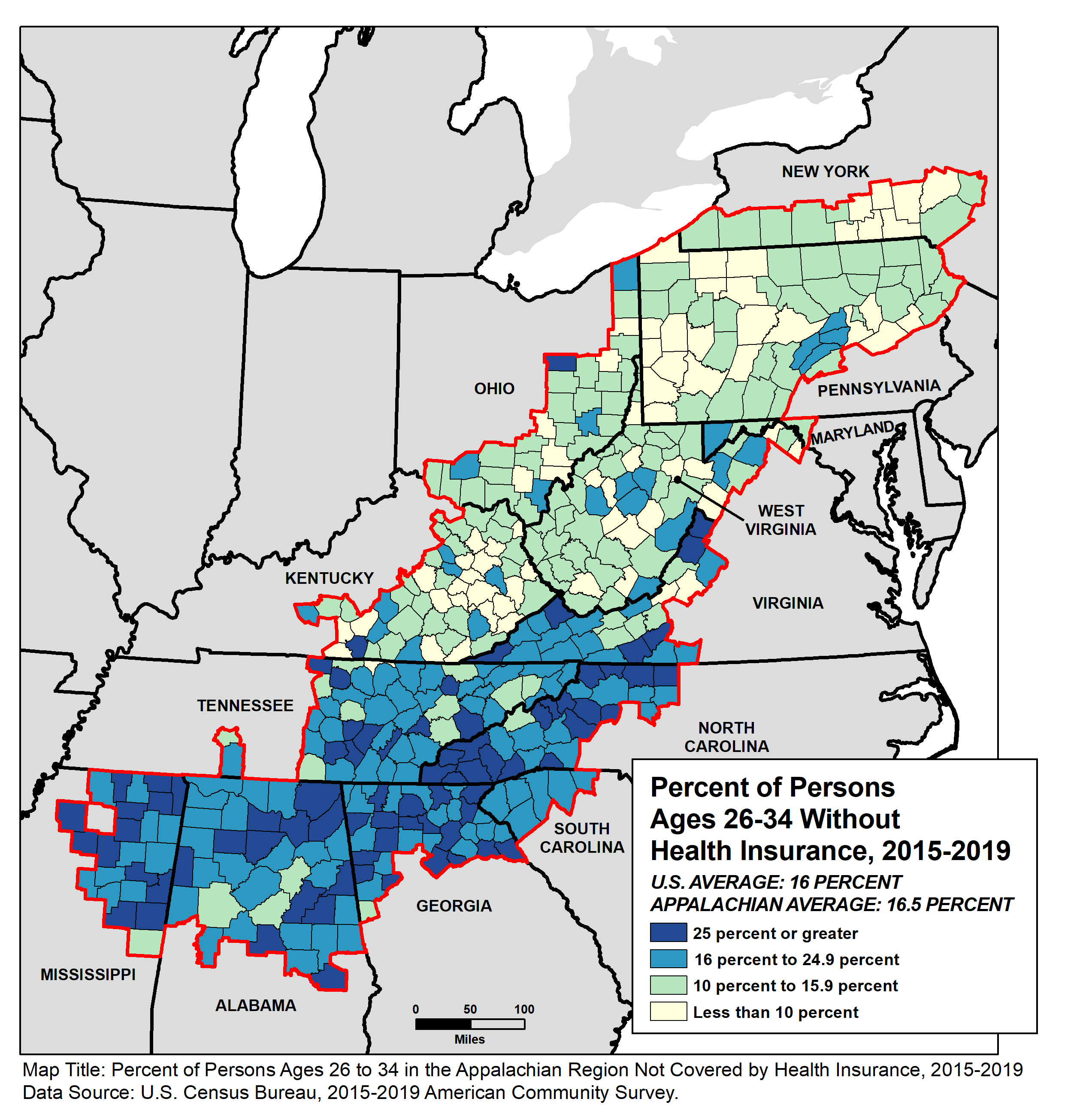 “Some young adults in Appalachia were struggling before the pandemic began,” says co-author Linda A. Jacobsen, PRB’s vice president for U.S. Programs. “We know that workers without college degrees were hit hardest with income and job losses because of the pandemic and are now having the hardest time getting hired. Many young adults in Appalachia are parents so the economic hardships they face are affecting their children too.”

The Pandemic May Have Heightened Isolation Among Disabled Adults

Among all age groups, the share of Appalachian residents who reported a disability (difficulty with hearing, vision, cognition, walking or climbing, self-care, or independent living) in 2015-2019 was above the national average—with the widest gap among 35-to-64-year-olds (more than four percentage points: 17% in Appalachia versus 12.6% nationwide). In Appalachia’s rural counties, nearly one in four adults ages 35 to 64 and two in five ages 65 and older reported having at least one disability.

In Central Appalachia (counties in eastern Kentucky, southwestern West Virginia, and parts of southwestern Virginia and northeastern Tennessee), nearly half of adults ages 65 and older were disabled, considerably higher than the national average of 34.5% (see Figure 2). 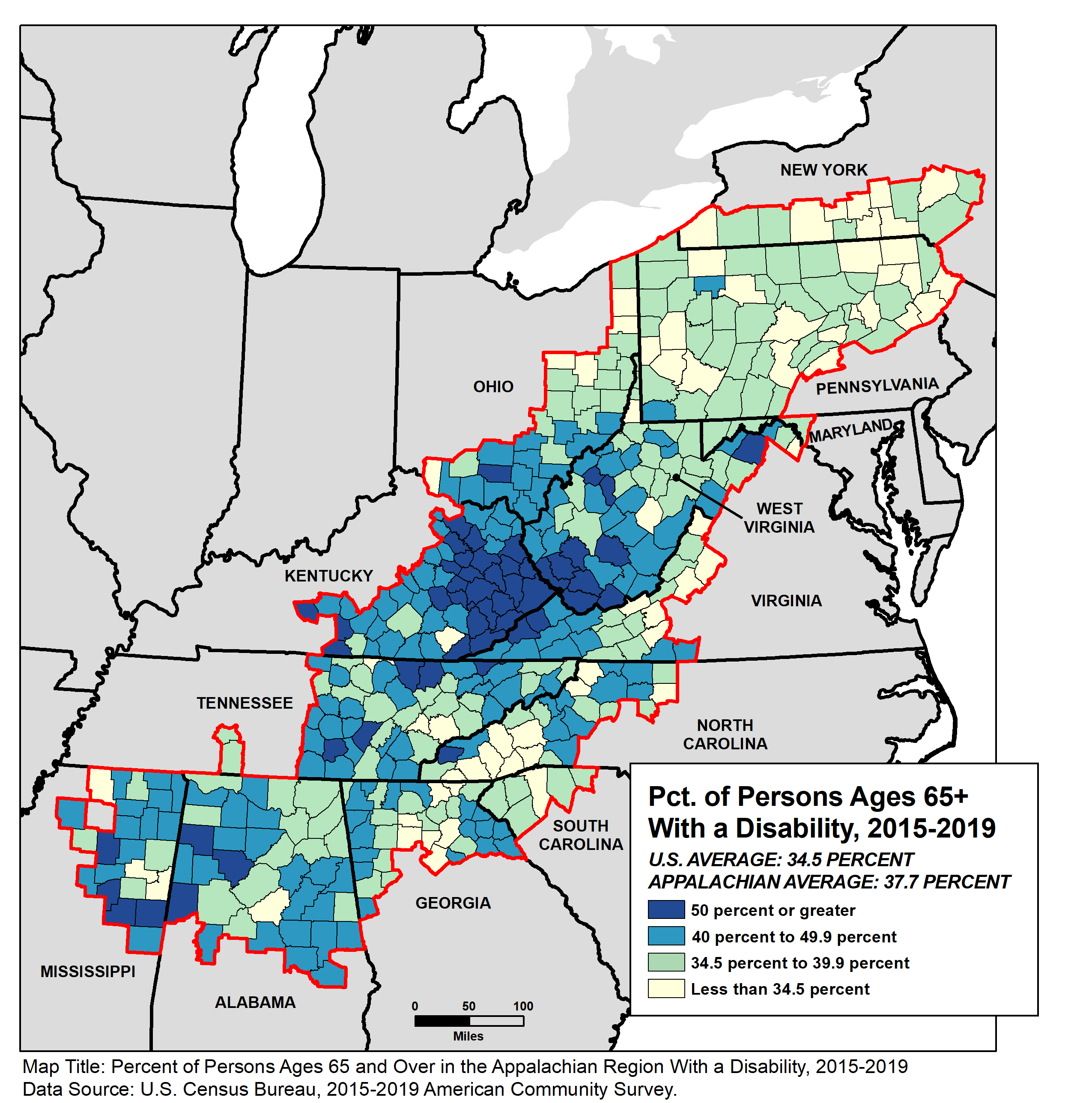 “Isolation related to stay-at-home orders during the pandemic may have been especially difficult in the Region for disabled residents, particularly those ages 65 and older,” Jacobsen points out. “They may have not been able to get the assistance they needed from agencies because of pandemic shutdowns, and family and friends may have reduced contact to protect them from exposure.”

Appalachia’s Digital Divide Is Most Acute in Rural Counties

Just over 86% of Appalachian households had access to a computer device, more than four percentage points below the national average. The share of households with broadband internet access, at 78%, was nearly five points below the national average. The report found that the digital divide was particularly acute in Appalachia’s rural communities: One in four rural Appalachian households lacked internet access compared with one in five households in rural counties outside the Region. (See Figure 3).

Figure 3. The Digital Divide Is Wider in Rural Appalachia Than in the Rest of Rural America

“With most schools closed throughout 2020 due to the COVID-19 pandemic, this rural digital divide has likely made online education and maintaining learning virtually impossible for a large share of children in rural Appalachian counties,” says Kelvin Pollard, PRB senior demographer and report coauthor.

“With high-speed internet access being credited as enhancing economic growth and development, these are signs that many communities in the Region may be at risk of being left behind,” argues Pollard. “The wide use of remote work, online shopping, and telemedicine during the COVID-19 pandemic has put a spotlight on these discrepancies.”

The report also compares Appalachia’s 107 rural counties to the 840 rural counties outside the Region. It shows that rural Appalachia lagged behind the rest of rural America on a variety of measures such as educational attainment, household income, and population growth.

“These comparisons suggest that conditions were already more challenging in rural counties within Appalachia than in rural counties outside the Region even before the pandemic brought job and income losses,” says Jacobsen.

The Appalachian Region encompasses 205,000 square miles along the Appalachian Mountains from southern New York to northern Mississippi, including portions of 12 states and all of West Virginia. The Appalachian Regional Commission report uses data from the 2015-2019 American Community Survey and the Census Bureau’s vintage 2019 population estimates—the most recent data available for the characteristics studied. It includes detailed tables and county-level maps covering state- and county-level data on population, age, race and ethnicity, housing occupancy and tenure, housing type, education, computer ownership and internet access, labor force participation, employment and unemployment, transportation and commuting, income and poverty, health insurance coverage, disability status, migration patterns, and veteran status. It also includes a detailed comparison of characteristics in rural Appalachian counties with those outside the Region.

ABOUT THE APPALACHIAN REGIONAL COMMISSION