Twenty years after its civil war ended in 1992, Mozambique has made significant progress. Economic growth has remained steady for over a decade. Malaria prevalence in children has declined and households are more protected by insecticide-treated nets or indoor spraying. More than one-half of all childbirths occur in health facilities. And early childhood mortality is declining dramatically, with half as many deaths among children under 5, compared to 14 years ago (see figure).

Early Childhood Mortality Is on the Decline in Mozambique. 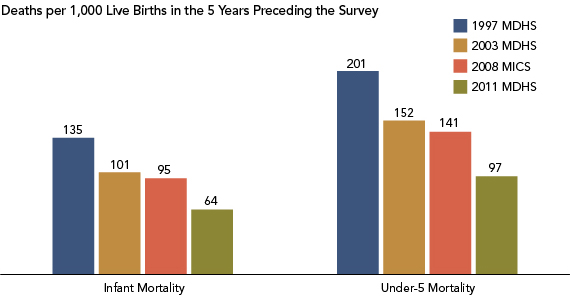 The country recently released a final report from its 2011 Mozambique Demographic and Health Survey (MDHS), lending evidence to this progress but highlighting areas where gaps remain. Fertility rates are still high (average of 5.9 children per woman), and in fact have risen slightly since the last MDHS in 2003 (5.5 children per woman). Fertility is lower for better-educated and wealthier women, and those living in urban areas.1

Getting the Word Out

To help inform decisionmakers about these gaps, PRB was asked, through its IDEA project, to develop a policy communications strategy to disseminate the 2011 MDHS to refocus attention on population, family planning, and health policies and programs. IDEA (Informing Decisionmakers to Act) provides information about family planning and reproductive health to policy audiences around the world. IDEA received support from USAID/Mozambique to partner with the Mozambican Instituto Nacional de Estatistics (INE) that conducted the 2011 survey.

IDEA staff collaborated with the staff from INE and the Mozambique Ministry of Health to develop a set of publications in Portuguese and English for provincial policymakers and other decisionmakers, educators, and journalists. (Several of the publications, in Portuguese, are online and linked below.) These included:

Demand for Materials Is High

On May 2, 2013, the national MDHS launched its findings. Following the launch, the IDEA products were disseminated during provincial-level meetings, sectoral meetings, and one-day media training workshops in 10 provinces and Maputo. At these meetings, INE used the products to raise awareness of areas requiring further attention and investment from local leaders. Toshiko Kaneda, the project leader and a senior research associate at PRB, said of PRB’s role in this process, “A huge amount of effort goes into collecting data, but they (INE) don’t feel like the data get enough use. That’s why a project like ours that tries to promote the use of the data by making the results accessible to policymakers, other decisionmakers, and nontechnical audiences is so important. “

Feedback from these meetings was positive. At least 30 percent of participants gave comments that reflected their intention to further use the data in their work: Requests came for access to more data, district-level disaggregation, and future coverage or content improvements. Kaneda reported, “INE was excited about the excellent feedback they were getting from all the print publications. They said they will be very beneficial as they promote the use of the MDHS results in policy planning, which they are trying to improve at the provincial-level.” Project consultant Marjorie Macieira noted that “INE expressed how helpful to them it was to have PRB participate in the selection and definition of key indicators, and with the actual design and development of the thematic brochures.”

Data from the MDHS, made accessible by PRB, can help decisionmakers and program planners to address health problems. Mozambique is located in southern Africa, the region with the highest prevalence of HIV in the world. More than 10 percent of adults ages 15 to 49 in Mozambique are living with HIV.3 According to the MDHS, neither women nor men have a comprehensive knowledge of HIV/AIDS and its prevention. Three-quarters of men know ways to prevent HIV, such as condom use and limiting sex to one uninfected partner, but only half of women share this knowledge. Risky sexual behavior is common (30 percent of men had two or more sexual partners in the last year before the survey) but few have undergone testing. Young people are a priority group for HIV-prevention activities throughout the region, especially given that early initiation of sexual activity is common: More than three-quarters of women ages 20 to 24 were sexually active before age 18, compared to two-thirds of men.4 The MDHS data can help health educators craft evidence-based programs to address these pressing problems, such as delaying the age of sexual activity initiation as a strategy to reduce the risk of HIV infection among youth.

Journalists, especially those who undergo media training, can use the MDHS data to make the numbers come alive in their stories. Macieira shared, “Another challenge was getting the media’s attention focused on disseminating the 2011 MDHS findings because of the generally less appealing interest of ‘statistical information.’ The media is more likely to cover breaking political developments and will need additional training to get them educated on maximizing use of the MDHS findings in their daily news coverage,” a plan, she noted, that INE already has in process.