The Backdrop: Rising Inequality in the U.S.

The poverty rate is one of the most widely reported measures of economic well-being in the United States, but rising income inequality has been a defining characteristic of the U.S. economy during the past 50 years.

Poverty rates have fluctuated over time, increasing during periods of job loss and decreasing when the economy recovers (see Figure 1). But In 2013, the national Gini Index—the most widely used measure of inequality—stood at .476, up from .463 in 2007 and .397 in 1967. A Gini value of zero means that all households have equal income, while a value of 1 means that only one household has all of the income, so higher values are equated with greater levels of inequality. In 2012, the Gini Index value matched the highest level ever recorded in the United States. Another measure of inequality, based on the share of income received by the top 20 percent of households, shows a similar increase. In 2013, the top 20 percent of households controlled over half (51 percent) of all household income. 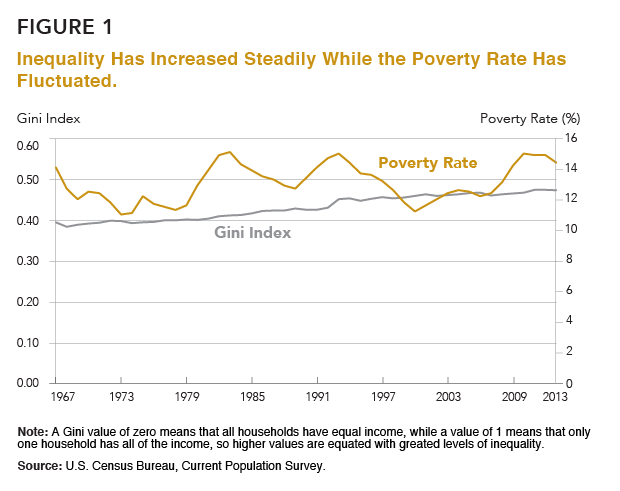 The Occupy Movement drew attention to rising income inequality in the United States with their slogan, “We are the 99%.” During the recession, income among the top 1 percent of families fell with the stock market crash and declines in earnings from capital gains. However, this decline was only temporary. By 2012, the top 1 percent of families—those with annual incomes over $394,000—controlled 22 percent of U.S. income, up from 18 percent in 2009.6 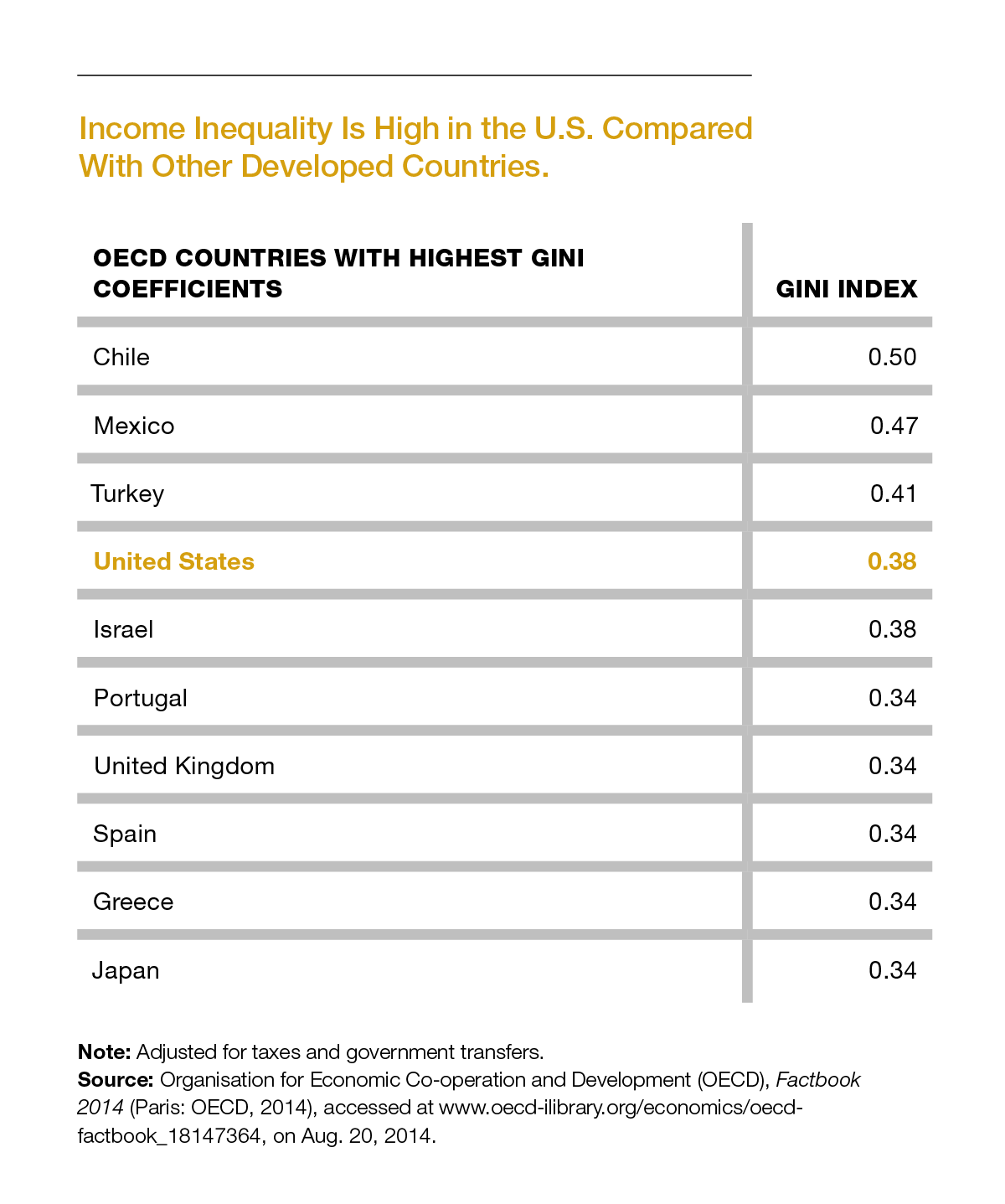 Gaps in household net worth, or wealth, are not reported as widely as differences in income, but in some respects, wealth is a better marker of family well-being. Among more-affluent households, wealth is mainly tied up in the stock market, but for most Americans, and especially those living in lower-income families, a home is the most valuable asset they will ever own. Homeownership provides a basic source of economic security and can shield families against material hardship by providing a cushion in the case of sudden loss of income. Owning a home also contributes to residential stability, civic engagement, psychological well-being, and children’s educational success.9

In the United States, the wealth gap is larger than the income gap, sharply dividing those at the top and bottom of the economic ladder. The Great Recession led to broad, across-the-board declines in wealth, but those at the top experienced smaller declines, in relative terms, compared with those at the bottom. As a result, the level of wealth inequality in the United States increased in the aftermath of the recession. Between 2007 and 2013, average wealth among the top 5 percent of households fell by 16 percent, compared with a 43 percent decline among middle-class households at the 50th percentile. By 2013, the top 5 percent of households had an average net worth 24 times that of households at the 50th percentile ($1.36 million compared with $56,000).10

How did this wealth gap come about? During the late 1990s, median household wealth sharply increased as the stock market boomed. Stock prices declined during the early 2000s, but wealth continued to grow with the increase in home values, benefitting the middle class as well as those in more-affluent households. But in 2007, home prices dropped sharply, wiping out trillions of dollars of assets. The middle class, which had more of their wealth tied up in their homes, was hit harder by the drop in housing prices compared with wealthier households. Foreclosures hit record levels, with 3 million homes receiving foreclosure notices in 2010.11 Between 2007 and 2013, home equity fell 61 percent among homeowners in the bottom half of the wealth distribution, compared with only a 20 percent decline among the top 5 percent of households.12 In the meantime, the stock market recovered most of its losses, fueling a rapid increase in assets among the wealthiest households.

NEXT: Where Poverty and Inequality Intersect