However, there is more to gender equality than closing the labor force gap. Among those working full-time and year-round, there is still a sizeable gap between the median earnings of men ($50,033) and women ($39,157). A higher proportion of women work in lower-paid service and retail jobs, but even for the same job, women earn significantly less than men. Women make up about 46 percent of those working full-time in management, business, and finance jobs but their median earnings in those positions are only about 74 percent of men’s earnings.27 Women are also underrepresented in high-paying jobs in the natural and physical sciences, mathematics, and engineering. Women currently account for nearly half of the total U.S. labor force but only about one-fourth of scientists and engineers. 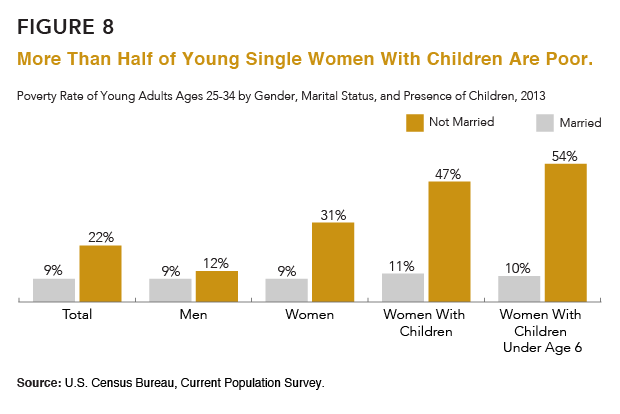 The gender wage gap is closing, partly because of the increase in women’s education relative to men. The proportion of women ages 25 to 29 with at least a bachelor’s degree has exceeded that of young men since 1991.31 A growing share of married women earn more money than their husbands—now 38 percent, up from 24 percent in 1987.32 The gender wage gap could improve with further reductions in gender discrimination at work and policies to help parents balance work and family responsibilities.

Government safety nets have reduced the burden of poverty for millions of lower-income families. From 1975 to 2007, aid through programs such as Food Stamps, Medicaid, and the Earned Income Tax Credit increased by 74 percent. However, married couples, older Americans, and lower middle-class families benefited disproportionately from this increase, while average benefits declined for the poorest families, especially single mothers and their children.33

In recent years, the proportion of people who are married has remained fairly stable for college graduates, but has sharply declined among those without college degrees.34 Some have argued that marriage is becoming a luxury good, reserved for men and women with better economic prospects.35 This trend is significant because marriage is associated with many benefits for families and individuals, including higher income, better health, and longer life expectancy. People with higher potential earnings and better health may be “selected” into marriage, resulting in better outcomes for married couples; but most researchers agree that marriage also has an independent and positive effect on well-being.36

NEXT: Education: The Great Equalizer?